LeBron James Led the Lakers to a Championship on the Court. He Helped Lead a Player Revolution off It

The North Star has dropped its paywall during this COVID-19 crisis so that pertinent information and analysis is available to everyone during this time. This is only possible because of the generous support of our members. We rely on these funds to pay our staff to continue to provide high-quality content. If you are able to support, we invite you to do so here.

On Oct. 11, LeBron James and the Los Angeles Lakers defeated the Miami Heat to win the 17th championship in Laker franchise history.

The victory was historic on multiple fronts, as it tied the Lakers with the Boston Celtics as the winningest championship teams in NBA History. It gave James a fourth NBA championship and Finals MVP award with his third team in a season that ended months later than scheduled due to a COVID-19 forced mid-season reset. 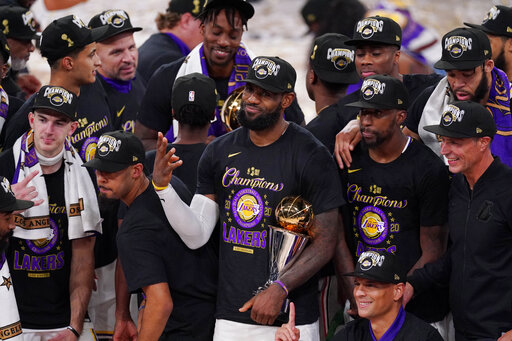 The championship also carried great sentimental value for the Laker organization, who dedicated their championship run to the legacy of Laker great, Kobe Bryant, who was tragically killed in a helicopter crash in January. However, it was the stream of tragedies that impacted the world after Bryant’s passing that framed the narrative of the 2019-2020 NBA season and placed the spotlight on James, one of the league’s all-time greatest, as a leader of one of the league’s greatest franchises.

The 2019-2020 NBA season came to an abrupt halt in March when the coronavirus pandemic was beginning to heavily spread across the U.S. The season resumed in July at a time it was usually over and players were confined to a “bubble” at the ESPN Wide World of Sports Complex in Orlando, Florida.

The bubble required players to adhere to strict social distancing regulations and routine COVID-19 testing. In addition to adjusting to the new normal of the bubble and the simulation of fans in the stadium, the season resumed at the height of civil unrest and uprisings in the aftermath of the police killings of George Floyd and Breonna Taylor.

James, who was already the league’s biggest star and one of its most outspoken players on matters of social justice, seized his platform to bring an elevated awareness to the plight of Black America.

“We want justice no matter how long it takes, even though it’s been so many days, so many hours, so many minutes for her family, for her community,” James told reporters after Daniel Cameron’s announcement about the grand jury decision in Breonna Taylor’s case.

He had been a vigilant advocate in the case of justice for Taylor since becoming aware of it. He also spoke out about the police shooting of Jacob Blake, the public lynching of George Floyd and regularly on the movement for Black lives.

James was never alone in his social justice advocacy, as several of the NBA’s most prominent stars used their voices and influences to move the needle of equality. But in a league of talented activist-athletes, James stood out as a once-in-a-generation talent that refused to shut up and dribble.

Instead, he has spent years lifting his voice and using his wide range of resources to better the lives of disenfranchised Americans. And after a decade-long drought, he afforded the Laker organization the ability to lift the NBA trophy at the conclusion of one of the most tumultuous years in the history of modern sports.

Donney Rose is a poet, essayist, Kennedy Center Citizen Artist Fellow, advocate and Chief Content Editor at The North Star. He believes in telling how it is and how it should be.

SHAUN KING: Amy Coney Barrett Is About to Be Voted Through, This Changes Everything...Read More